Abilio Diniz’s four lessons to not be discouraged in the Covid-19 crisis.

Abilio Diniz’s four lessons to not be discouraged in the Covid-19 crisis. 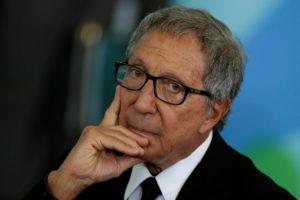 Abilio Diniz, the third largest Carrefour shareholder, gestures during a meeting of the Council for Economic and Social Development (CDES) at the Planalto Palace in Brasilia, Brazil March 21, 2018. REUTERS/Ueslei

At the age of 83, father of six children and one of the greatest entrepreneurs in the country, Abilio dos Santos Diniz, better known as Abilio Diniz, has as his main life goal the search for “quality longevity”. The paulistano practices a physical exercise routine of two hours a day and is classified as “optimistic”, even in the midst of the most “violent” crisis he has ever faced, the one caused by Covid-19.

As a way to help micro and small entrepreneurs, impacted by the pandemic, decided to bet on a program to support this niche, from low interest loans, in an amount that adds up to R $ 20 million. Called ‘Estímulo 2020’, and created together with entrepreneur Eduardo Mufarej, it offers financing with interest of 4% per year, grace period of three months and installments up to 15 times.

Part of the project includes mentoring with Abílio himself, in which he says he does not give a “magic word”, or “survival tip” – but points out opportunities, beyond the crisis. As a member of the board of directors of Carrefour global and president of Península Participações, the billionaire has accumulated business experience. Check out some of the teachings he gave, in an interview with CNN Brasil, to get through the current turbulence in the best way.

Abilio recognizes that he has faced many crises throughout his life, but he defines the current one as the most “violent”. Still, he says that this moment has a characteristic common to previous instabilities: it has a beginning, middle and end. “People need to be clear about this: it will end. One day it will end,” he says.

The timing of this will be unclear, but in the worst case scenario, it predicts up to 18 months – a time when the development and commercialization of a vaccine would be sufficient, which, according to him, would put an end to the crisis.

For the entrepreneur, the crisis is much easier to manage if there is a separation of reality and fantasy. “If we are left with only real fears, it is possible that we will be able to manage them well. Now the imaginary ones are much more complicated”, he says.

In the entrepreneur’s assessment, the fears defined as imaginary disturb more, because they disturb sleep, and cause people to wake up thinking about those fears. “You have to distinguish and not get out of reality.”

“If you are not serene, how will you manage things?”, Asks the businessman. For Abilio, serenity is a key value for “doing well” and being in control of business and emotional life.

This exercise, he adds, is applied for its own sake. Diniz says that, despite being less impacted than other entrepreneurs, smaller and more vulnerable, he knows many people who suffer in the wake of the recession that has already shown some strength in the first quarter’s GDP result. “We are also involved, suffering for the people, many people we know”, he says.

The fourth and final advice is to have faith. Throughout life, says Abílio, a lot is lost, except for waiting – something difficult to subtract from human beings, he says.

“We cannot lose hope. This is what I intend to pass on to people who seek my mentoring, so that they can remain optimistic about the current scenario”, he concludes.